About the Ely Standard


The Ely Standard is a local weekly newspaper available across East Cambridgeshire including Sutton, Littleport and Ely.


In recent years, Ely has earned the tag of being the fasting growing city in Europe and more recently identified as home to a huge percentage of the country's migrant population who are attracted by the rich Fen landscape and the abundance of labour opportunities that presents.


The area is also synonymous with tragedy. In August 2002, the nearby town of Soham became the centre of media frenzy when 10-year-old school girls Holly Wells and Jessica Chapman went missing. Their bodies were discovered in a wooded area near Lakenheath two weeks later and Ian Huntley, a caretaker at the local secondary school, was charged with two counts of murder.


Ely earns it city status due to its magnificent Norman cathedral and Christian worship can be traced back as far as 673 when Etheldreda, daughter of the king of East Anglia founded a nunnery there.


Over the last millennia, the city has been visited by historic figures including King Canute, Hereward the Wake, William the Conqueror and Oliver Cromwell lived locally during the last years of his life.


The newspaper was established in the early part of the 19th Century and has a district office in Market Street in the city in the shadow of the cathedral.

Health and safety finally caught up with the straw bear at Sunday's burning ceremony.

East Cambs Council axes £47,000 Citizens Advice Bureau with the promise they can do it bigger and better 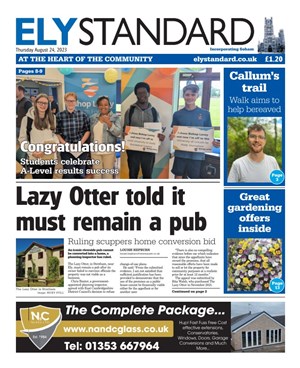 Porsche worth around £60,000 seized by Cambs cops after driver found without one important thing